Ingram School of Dance has a rich heritage in dance. The studio was established in the Orange community in 1933 by Mary Alice Ingram Callahan.  She conducted classes from 1933 to 1986 when former student, Pam Boehme Simon, returned and purchased the studio.   “Miss Mary Alice” still comes to every recital, visits the studio regularly, and has even stepped in as substitute teacher for Miss Pam when necessary.

“Miss Mary Alice” began dancing at the age of ten and has never considered what life would be without dance. She started teaching children in the neighborhood when she was only thirteen.   At one point, while visiting in New York City, she auditioned for a Broadway play and was accepted.  She then turned down the role saying, “I just wanted to see if I had what it took.  Thanks very much, but my first love is teaching dance,”  and she happily returned to Orange and her students. 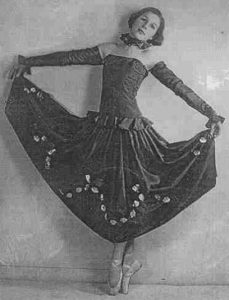 “Miss Mary Alice” has made numerous contributions to the Orange community.  During wartime in Orange, she taught free dance lessons to the children of the women who had to go to work while their husbands were off fighting for our country.  Her dancers have entertained at various civic functions throughout the years.  She has choreographed several productions for the Orange Community Players. Her contributions won her the honor of a special exhibit in the Heritage House Museum. She is a charter member of Dance Masters of America, Inc. and the South Texas Association of Dance Teachers and, among many other offices held, was president of the organization at one time. 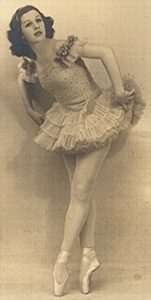 Her students have experienced their own successes as a consequence of her fine instruction. Graduates of Ingram School of Dance have distinguished themselves as professional dancers in companies throughout the United States and internationally, and as dance instructors at university and professional levels.  To this day, her students are actively dancing and teaching in locations from coast to coast, in Alaska, and Europe. 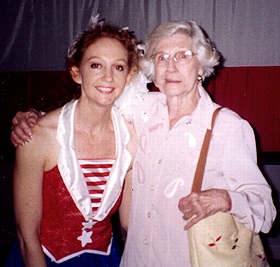 “Miss Pam” and “Miss Mary Alice” backstage after the 2002 recital.

As of the fall of 2017, Ingram School of Dance passed into the hands of former student and instructor, Alicia Keeney Whitaker.  Due to health reasons, “Miss Pam” semi-retired and sold the studio to her.  “Miss Alicia” is proudly carrying on the traditions, values, and quality for which Ingram has always been known.

Scroll back to top